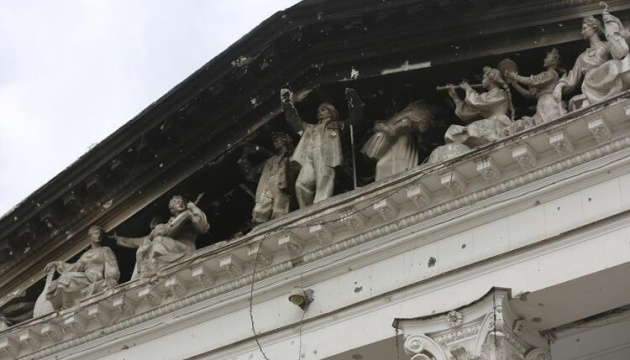 The Russians are preparing to release a pseudo-investigation into the circumstances of the attack on the Mariupol Drama Theater in an attempt to shift responsibility for their own crime onto the Ukrainians.

This was reported by the Main Intelligence Directorate of the Ministry of Defense of Ukraine, according to Ukrinform.

“The purpose of such a stunt is to try to remove responsibility for the killing of several hundred civilians who were sheltering in the theater at the time of the attack. Most of them were women and children,” the agency noted.

According to Ukrainian intelligence, several crews of Russian TV channels are shooting staged videos that are supposed to “prove” that the explosion in the theater was set off inside the building, and that all the destruction was caused by “the detonation of a large amount of explosives.” Also, it will be claimed that the death toll stood at just 14. Propagandists even interviewed so-called “witnesses” who saw how “uniformed people had brought boxes” into the building the day before.

“Meanwhile, the bombing of the Mariupol Drama Theater was and remains one of the most horrendous war crimes committed by the Russian occupiers during the war they unleashed. Russian planes dropped two 500-kilo aerial bombs on the theater premises. At the time of the attack, there were up to 1,000 civilians sheltering there. The vast majority were women and children who were hiding from Russian shelling,” the agency emphasized.

According to various estimates, between 300 and 700 people died in the strike. It is impossible to confirm an exact number of casualties, as the Russians never allowed rescuers to approach the ruins, the intelligence service emphasized.

As Ukrinform reported, Russia’s large-scale invasion caused one of the biggest humanitarian disasters in Mariupol. The city was almost completely destroyed as a result of enemy shelling.

The Mariupol Drama Theater, which had been used as a bomb shelter, was bombed by Russian aircraft on March 16, killing at least 300 civilians.

Since the Russian invasion, up to 22,000 civilians have died in the city. Currently, more than 100,000 residents remain in the blocked area. Mariupol is facing a threat of an environmental disaster and an outbreak of infectious diseases.