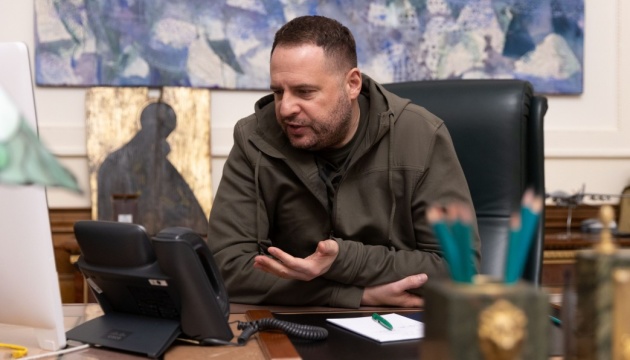 Forty-four countries have already joined the initiatives to supply food from Ukraine supported by the EU and the UN. Thanks to the grain program, 5 million people around the world who suffer from food shortages are provided with food.

“Forty-four countries have already joined the grain initiatives, in particular, they have been supported by the EU and the UN. Despite the war, Ukraine is now doing everything possible to end hunger in the world when many people suffer from food shortages. Thanks to the grain program, at least 5 million people who need food support receive it,” Head of the President’s Office Andriy Yermak said, presenting the Ukrainian Peace Formula at the World Economic Forum in Davos on January 19, Ukrinform reports.

According to him, Ukraine is ready to maintain a high level of food production even in extreme conditions as well as to increase the number of ships transporting food.

The Head of the President’s Office also mentioned the Grain from Ukraine program launched on the anniversary of the Holodomor and emphasized that food cannot be turned into a weapon.

As reported, addressing the G20 summit participants on November 15, President Volodymyr Zelensky proposed a peace formula and outlined 10 mandatory conditions for ending the war in Ukraine. In particular, he mentioned radiation, nuclear, food, and energy security, release of all prisoners and deportees, implementation of the UN Charter and restoration of the territorial integrity of Ukraine and the world order, withdrawal of Russian troops and cessation of hostilities, restoration of justice, fight against ecocide, prevention of escalation, consolidation of the end of the war.

Addressing the World Economic Forum participants, Zelensky called on the world to implement the Peace Formula as soon as possible.