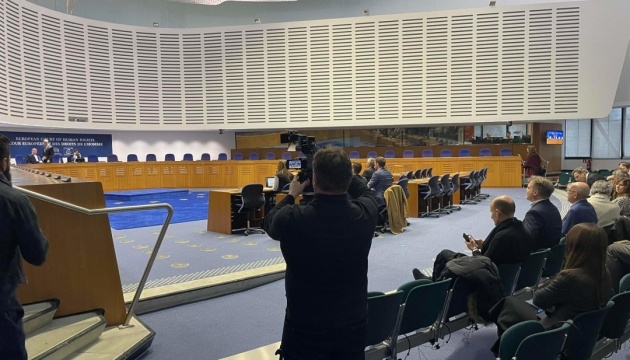 The European Court of Human Rights (ECHR) has declared the international case “Ukraine and the Netherlands v. Russia” partly admissible for consideration.

That’s according to an Ukrinform correspondent.

The hearing started at 14:30 local time and lasted about 20 minutes.

In its decision in the case of Ukraine and the Netherlands v. Russia (applications Nos. 8019/16, 43800/14 and 28525/20) the ECHR’s Grand Chamber has declared the applications partly admissible. The decision is final and will be followed by a Grand Chamber judgment on the merits at a later date.

“The case concerns complaints related to the conflict in eastern Ukraine involving pro-Russian separatists which began in spring 2014. The Government of Ukraine principally complained about alleged ongoing patterns (‘administrative practices’) of violations of a number of articles of the European Convention on Human Rights by separatists of the ‘Donetsk People’s Republic’ (‘DPR’) and the ‘Luhansk People’s Republic’ (‘LPR’) and by members of the Russian military. The Government of the Kingdom of the Netherlands complained about the shooting down of Malaysia Airlines flight MH17 in eastern Ukraine on 17 July 2014, which resulted in the deaths of 298 people, including 196 Dutch nationals. The applicant Governments claimed that their complaints fell within the jurisdiction of the Russian Federation. Since it was alleged that many of the administrative practices were ongoing, the Court considered the evidence up to 26 January 2022, the date of the hearing on inadmissibility in the case,” the Court said in a press release.

Among other things, the Court found that areas in eastern Ukraine in separatist hands were, from 11 May 2014 and up to at least 26 January 2022, under the jurisdiction of the Russian Federation. It referred to the presence in eastern Ukraine of Russian military personnel from April 2014 and the large-scale deployment of Russian troops from August 2014 at the latest.

The Court held that there was sufficient evidence to satisfy the burden of proof at the admissibility stage of administrative practices in violation of a number of Articles of the Convention and it declared the majority of the complaints by the Government of Ukraine admissible. Likewise, the evidential threshold for the purposes of admissibility had been met in respect of the complaints of the Government of the Netherlands concerning the downing of MH17 which were therefore also declared admissible.